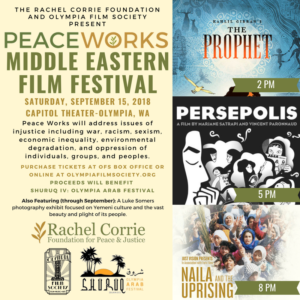 We would like to thank everyone who joined us in Olympia on March 16, 2013 to remember and celebrate Rachel Corrie.  The day was filled with moving speeches and personal accounts, music, dance and remembrances.  We want to share with you the incredible keynote addresses provided by Ramzy Baroud, Phyllis Bennis, and moderated by Dr. Steve Niva.

On November 28th, we hosted an educational event at Traditions Café in Olympia, Washington.  A panel discussion and Q&A talked about what recently happened in Gaza, and what we may expect in the future.  Below is the live video from that event:

The Israeli Government is currently mounting the largest assault on the Gaza Strip since
the winter of 2008-2009, when “Operation Cast Lead” resulted in the deaths of 1,400
Palestinians, the majority civilians and over 300 children. As we write these words, Israeli
tanks and troops are moving into position for a possible invasion of Gaza.

This is not a conflict between equals. Israel has one of the most advanced military forces
in the world and receives 3 billion dollars in American military aid every year. Israel
has maintained a siege of Gaza, on land, sea and air since 2007, after Hamas achieved
electoral victory in 2006 and took control. Israel’s blockade of Gaza is so tight that the
Israeli Government created calculations about exactly how much food they could stop at
the border before Palestinians began starving in large numbers. The military also makes
frequent incursions into Gaza. All this makes a mockery of Israel’s claim that Gaza has been
unoccupied since illegal Israeli settlements were removed in 2005 (even as illegal Israeli
settlements continue to expand in the occupied West Bank).

But a reader of your paper would not know any of this. Instead, articles from McClatchy and
the Associated Press reprinted in The Olympian do not make the briefest reference to Israel’s
continuing occupation and control of Gaza. Without mention of Israel’s long-term policy
towards Gaza, it is impossible to understand the current situation. Furthermore, the articles
do not question the official statements of the Israeli Government. One article titled All-out
War Feared as Israel Moves Troops Toward Gaza, Rockets Land near Tel Aviv, printed in The
Olympian November 15th, states, “Israeli aircraft and warships retaliated for hundreds of
rockets fired into the country in recent weeks.” However, before the Israel began its military
assault on November 14th, there was a two-day calm, and Hamas offered to agree to a truce
if Israel ceased military operations in Gaza. Israel refused and did not respond. This is not
the first time Israel has broken a truce with Palestine. During a previous period of calm this
month, Israel invaded Gaza November 8th, killing a 12-year-old boy. Similarly, before the
2008-2009 assault, Israel violated a June 2008 ceasefire agreement. The Palestinian militant
response to Israel’s violation of that agreement was then used to justify Israel’s massive
military attack. The same pattern of violated agreements holds throughout Israeli history,
from the 1956 invasion of Egypt to the 1982 invasion of Lebanon, as well as more recent
acts of aggression.

We ask that instead of continuing to use flawed and incomplete information, The Olympian
begin investigating and reporting on this issue from multiple sources. There are many more
reliable resources for information on the conflict, including human rights organizations
such as Amnesty International (http://www.amnesty.org/), Human Rights Watch
(http://www.hrw.org/), B’tselem (in Israel), United Nations Office for Coordination
of Humanitarian Affairs – Occupied Palestinian Territories (http://www.ochaopt.org/
), Electronic Intifada (http://electronicintifada.net/), The Institute for Middle East
Understanding (http://imeu.net/) and many others. We would be pleased to discuss our
concern and ideas about sources of information with you further.

Sincerely,
The Board and Staff of the Rachel Corrie Foundation