You’re watching your children play soccer. It’s a chilly weekend morning and you may be upset at the lost sleep involved in getting up and getting them there. The grass is green and the net, goal posts, striping are new and unscarred from previous play; their maintenance secured through a school district budget that generally passes grudging voter approval every two years. You see the mix of parents, some of them groggy, some of them slightly too excited by the impending competition. And it’s all incredibly normal.

What if the infrastructure for everything in the above scenario simply didn’t exist? What if there wasn’t a dew-covered green field behind the local elementary school that was open to all for community activities, funded by tax payers and maintained by salaried groundskeepers? What would it take for that scene to play out in a refugee community in the southern border town of Rafah, Gaza?

Every year, community members in the Yibna neighborhood of Rafah find out. Amid the ongoing brutal siege conducted by the Israeli occupation forces and the often violent struggle between internal political factions, comes the third annual Ramadan Soccer Tournament, organized by the Rachel Corrie Sports Initiative in Rafah. 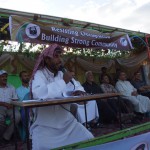 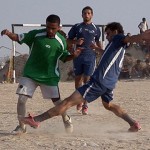 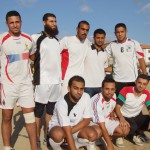 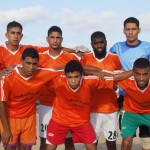 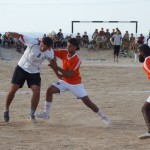 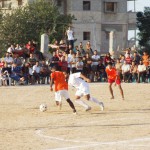 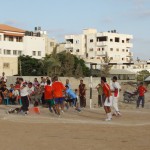 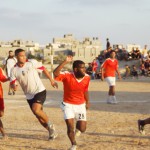 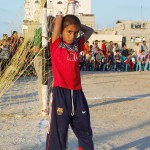 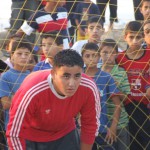 It isn’t easy. People in this community are still reeling from a savage December 2008 military assault. They are part of a captive population of 1.5 million people who face a grim and grinding daily fight to prevent social collapse and cultural extinction. The soccer pitch is not grass. It’s on packed, dry, tan earth. The temperatures can be somewhat hotter than what some of the soccer parents you know might be comfortable with. And matches can potentially be called off due to curfews or air attack, as opposed to foul weather. Throwing a soccer tournament in the midst of these conditions becomes itself an act of resistance. The demand for some amount of normalcy itself becomes revolutionary.

Each year, a vital international community raises funds to keep the Ramadan Soccer Tournament going and to make the soccer field available year-round. This year the Rachel Corrie Foundation acted as the sponsor through which generous donations were sent. The Foundation helped raise over $12,000.00 to fund the tournament.

Tournament and sports initiative co-founders Khaled Nasrallah and Adnan Abu Al Sa’ud chose to name the event after their friend Rachel Corrie. “Rachel came among us and joined us in our struggle for justice as Palestinians,” Khaled said. “In the spirit of Rachel Corrie we hope to provide more than an event, but also a place for all the people of Rafah, regardless of faction. This tournament will provide a place for all community members–especially the heavily affected youth population in Rafah–to participate as Palestinians. It is truly a place to re-establish community.”