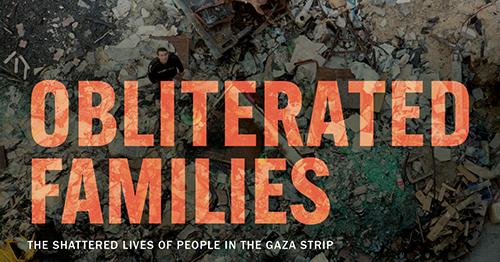 A film screening and discussion with Anne Paq, a member of the Activestills photo collective, and journalist Ala Qandil.

Obliterated Families: Intimate Portraits of Gaza’s Lost is an award-winning multimedia web documentary about families from the Gaza Strip whose lives were shattered in the Israeli offensive in 2014. It tells the stories of some of these families, of their loved ones who were killed, and of those who survived.

The web documentary, now in English and in French, is available at http://obliteratedfamilies.com/en/. It was launched on 9 July 2016, around the second anniversary of the beginning of the Israeli offensive on the Gaza Strip.

This tour runs from April 2-May 10 and is sponsored by the American Friends Service Committee (AFSC). Learn more about the tour here. Check out AFSC’s new campaign Gaza Unlocked.