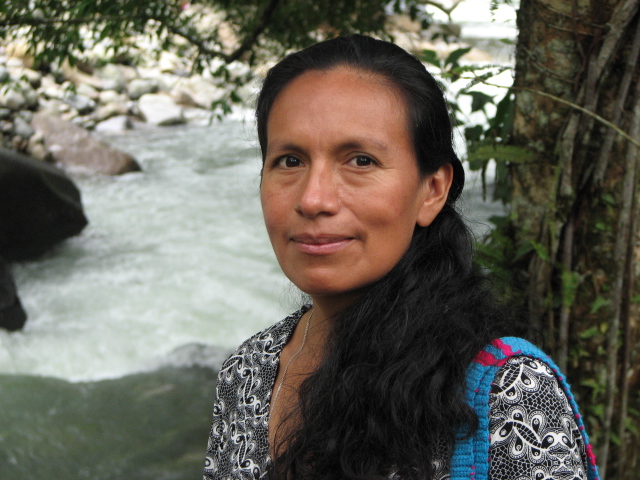 Indigenous Defender from Colombia:
For the Earth, For Life, For Our Existence

Colombian activist Carmenza Tex-Juagibioy, an environmental defender from the Kamentsa’ indigenous community in Colombia, and Steven Bray, former engineer of Caterpillar Corp. and member of the MRSCP (Madison-Rafah Sister City Project) and also Friends of Colombia Support Network-Madison, will be traveling to PNW from April 12-16. Tex-Juagibioy and Bray recently returned to the U.S. from Colombia for a three-month speaking tour around the United States.

The purpose of her trip is to build ongoing connections with indigenous leaders, non-profits organizations, community members, and activists to strengthen support and help connect indigenous struggles across borders involving human rights violations and environmental protection. Mining, oil extraction, pollution, fumigation of crops in the name of the war on drugs, and armed violence are parts of their life but the construction of the new highway through their sacred land in the Andes, connecting the economy of Brazil to a Pacific port, is at the center of their struggle. To learn more about the Putumayo region and the Kamentsa community check out this video featuring Carmenza, “Valley of Sibundoy – Mining and Indigenous Resistance.”

At 6:30pm Carmenza will be giving a presentation followed by a Q&A. Come listen to her story and find out how you can support the Kamentsa’ indigenous community in Colombia.

*Please bring a potluck item to share as we’ll be eating dinner promptly at 6pm when folks arrive.

Carmenza Tez Juagibioy was born on November 27, 1974 in the Ancestral Territory Carlos Tamoabioy, which belongs to the indigenous nations Kamentsa and Inga, known today as Sibundoy Valley, state of Putumayo, Colombia. She grew up in her home with her parents Maria Clara Juagiboy Chindoy and Nestor Tez Salazar. They lived in the rural neighborhood of Las Cochas, where she went to elementary school. Her high school studies were started at the Normal School and at the Colegio Champagnat in the municipality of Sibundoy. In 2011 she was elected by democratic vote of the Kamentsa as a member of the governmental body of this population as Alguacil ii. She assumed this position, that had a lot of challenges, with courage to confront them, demanding respect for the ancestral presence of indigenous people in the Territory. The same year she was elected by both the Inga and the Kamentsa as their delegate to advance in the process of complaint for the vulnerability on their territorial rights before the Independent Mechanism for Consulting and Investigation (MICI) of the Inter- American Development Bank (IADB). She was also part of the creation of the Minga de Resistencia for the collective rights of the Indigenous People of Putumayo, Cauca and Nariño. In order to confront legal actions, lead and accompany peaceful mobilizations against the Colombian state to claim their indigenous peoples’ territorial and collective rights, she renounced her religious institution in 2012, in order to continue her work as a citizen, not only defending human and collective rights, but also keeping up the processes for the territorial defense of the Kamentsa and Inga indigenous people and participating in the dynamic processes of social organizations in Putumayo. She has engaged in these activities in the firm belief that social processes are born from the effort and sacrifice of the people, and in this way they can transcend their problems in time thanks to the efforts and sacrifice of the people. These efforts get stronger with the goodwill and generosity of persons who feel deeply desires for Justice and Equality, along with the dream that someday their collective and human rights will become a reality.

Steven Bray was an engineer for 36 years, working on sustainable energy from 1977 through 1979 at General Electric Corporate Research in Schenectady NY, then from 1980 through 2012 at Caterpillar, Inc. in Peoria IL, first in engine research then electronic controls. In October of 2011 Steven ended his engineering career the day he read an email from the CEO requesting that employees support the US free trade agreements with Colombia, Panama, and South Korea. At the same time, Father Jose Restrepo had just been murdered after posting a video showing the imminent displacement of his community at Marmato in Colombia by a Canadian mining corporation. Steve’s employer, Caterpillar is the world’s leading manufacturer of mining machines. Steve had global responsibility for software technology across the entire product line of Caterpillar machines and engines when he ended his career. Since 2012 Steve works independently and through multiple organizations toward a sustainable future with peace and justice. He has participated in these struggles within the Unites States, the Middle East, and Latin America.  He now lives in an indigenous community in the Andes Mountains of Colombia.